The Mill, The War and More

This" nutshell" history of Remington is excerpted from materials recently submitted to the Virginia Department of Historic Resources on behalf of Fauquier County. The report is written by Maral S. Kalbian, Architectural Historian, dated March 20, 2002, and her sources include “Welcome to Remington: A Walking Tour", and Eugene M. Scheel's "The Guide to Fauquier" (1976)

Members of the Stone and Bowen families originally owned the land on which Remington is located. The area was settled in the early- to mid-19th century and from 1839 was known as Millview, in reference to a mill along the nearby Rappahannock River. The community was renamed Bowenville around 1850, and again changed to Rappahannock Station after 1852 when the Orange and Alexandria Railroad was completed through town. In 1890 the name was changed once more, this time to Remington. According to one account, the name Remington was chosen because the citizens liked the way it sounded, while another story maintains it was chosen in honor of a well-liked railroad conductor named Captain Remington.

Remington is sited about ½ mile from the Rappahannock River. In January, 1829 the General Assembly granted the Rappahannock Company a charter to build a canal from Falmouth to Ward's Mill in Rappahannock County. The canal was finally completed about 20 years later only to be overshadowed by the arrival of the Orange and Alexandria Railroad in the early 1850s. Whereas Remington's earliest history was tied to the River and the mill it powered, the arrival of the train through the community spurred growth in a new direction. Architectural evidence supported by a cursory review of Civil War-era maps seem to indicate that the presence of the train did not substantially affect the town until after the Civil War.

Remington, (then known as Rappahannock Station) was the site of much Civil War activity. Both sides fiercely contested control of the Rappahannock River and there was considerable destruction in the area, resulting in the loss of several buildings and structures. The town of Remington was included in the proposed Remington Station Battlefield District (23-5050) that was identified in the early 1990s as part of the Civil War Sites Advisory Commission's survey. In addition, many of the surrounding hillsides have surviving earthworks.

The Crossroads of Conflict — Remington became the site of some of the fiercest fighting during the Civil War. The fighting often drew close to this town because of its strategic location on the Rappahannock River, and for the railroad which passed through town. Kelly's Ford was the site of numerous engagements contesting its river crossing. The Battle of Brandy Station was the largest cavalry battle of the war, and it swelled around this small town in June of 1863.

Today, many vestiges of war remain visible. Both Union and Confederate earthworks are still clearly visible in many areas, as are the ruins of bridges, mills, and other structures which suffered the ravages of war.

Listed below are some synopses of the fighting around Rappahannock Station during the war. ( Courtesy of the National Park Service. ) 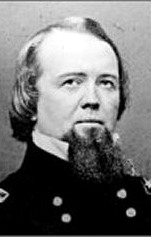 In early August, Lee determined that George B. McClellan's army was being withdrawn from the Virginia Peninsula to reinforce John Pope. He sent James Longstreet from Richmond to join Thomas J. "Stonewall” Jackson's wing of the army near Gordonsville and arrived to take command himself on August 15. On August 20 and 21, Pope withdrew to the line of the Rappahannock River. On August 23, J.E.B. Stuart's cavalry made a daring raid on Pope's headquarters at Catlett Station, showing that the Union right flank was vulnerable to a turning movement. Over the next several days, August 22 – 25, the two armies fought a series of minor actions along the Rappahannock River, including Waterloo Bridge, Lee Springs, Freeman's Ford, and Sulphur Springs, resulting in a few hundred casualties. Together, these skirmishes primed Pope's army along the river, while Jackson's wing marched via Thoroughfare Gap to capture Bristoe Station and destroy Federal supplies at Manassas Junction, far in the rear of Pope's army.

Battle of Kelly's Ford, also known as the Battle of Kellysville, took place on March 17, 1863 in Culpeper County, Virginia as part of the cavalry operations along the Rappahannock River during the American Civil War. Kelly's Ford was one of the early larger scale cavalry fights in Virginia that set the stage for Brandy Station and cavalry actions of the Gettysburg Campaign. Twenty-one hundred troopers of Brig. Gen. William W. Averell's cavalry division crossed the Rappahannock River to attack the Confederate cavalry. Brig. Gen. Fitzhugh Lee counterattacked with a brigade of about 800 men. The “Gallant” Pelham was killed. After achieving a localized success, Union forces withdrew in mid-afternoon.

Battle of Brandy Station June 9, 1863.Union Maj. Gen. Alfred Pleasonton attacked Confederate Maj. Gen. J.E.B. Stuart's cavalry near Brandy Station mistakenly believing it to be a smaller force. Pleasonton's force numbered 10,000 while Stuart had approximately 9,000 under his command. At dawn on June 9th, the Union cavalry corps launched a surprise attack on Stuart's cavalry at Brandy Station. After an all-day fight in which fortunes changed repeatedly, the Federals retired without discovering Lee's infantry camped near Culpeper. This battle marked the apogee of the Confederate cavalry in the East. From this point in the war, the Federal cavalry gained strength and confidence. Brandy Station was the largest cavalry battle of the war and the opening engagement of the Gettysburg Campaign. 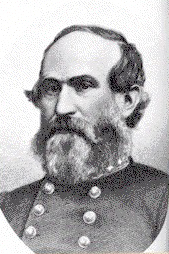 Battle of Rappahannock Station — November 7, 1863. During the Bristoe Campaign, the Union army affected a crossing of the Rappahannock River in two places. An early morning attack overran the Confederate bridgehead at Rappahannock Station, capturing more than 1,600 men of Jubal Early's Division. Fighting at Kelly's Ford was less severe with about 430 casualties, but the Confederates retreated allowing the Federals across in force. On the verge of going into winter quarters around Culpeper, Lee's army retired instead into Orange County south of the Rapidan River. The Army of the Potomac occupied the vicinity of Brandy Station and Culpeper County.

The Mill on the Rappahannock 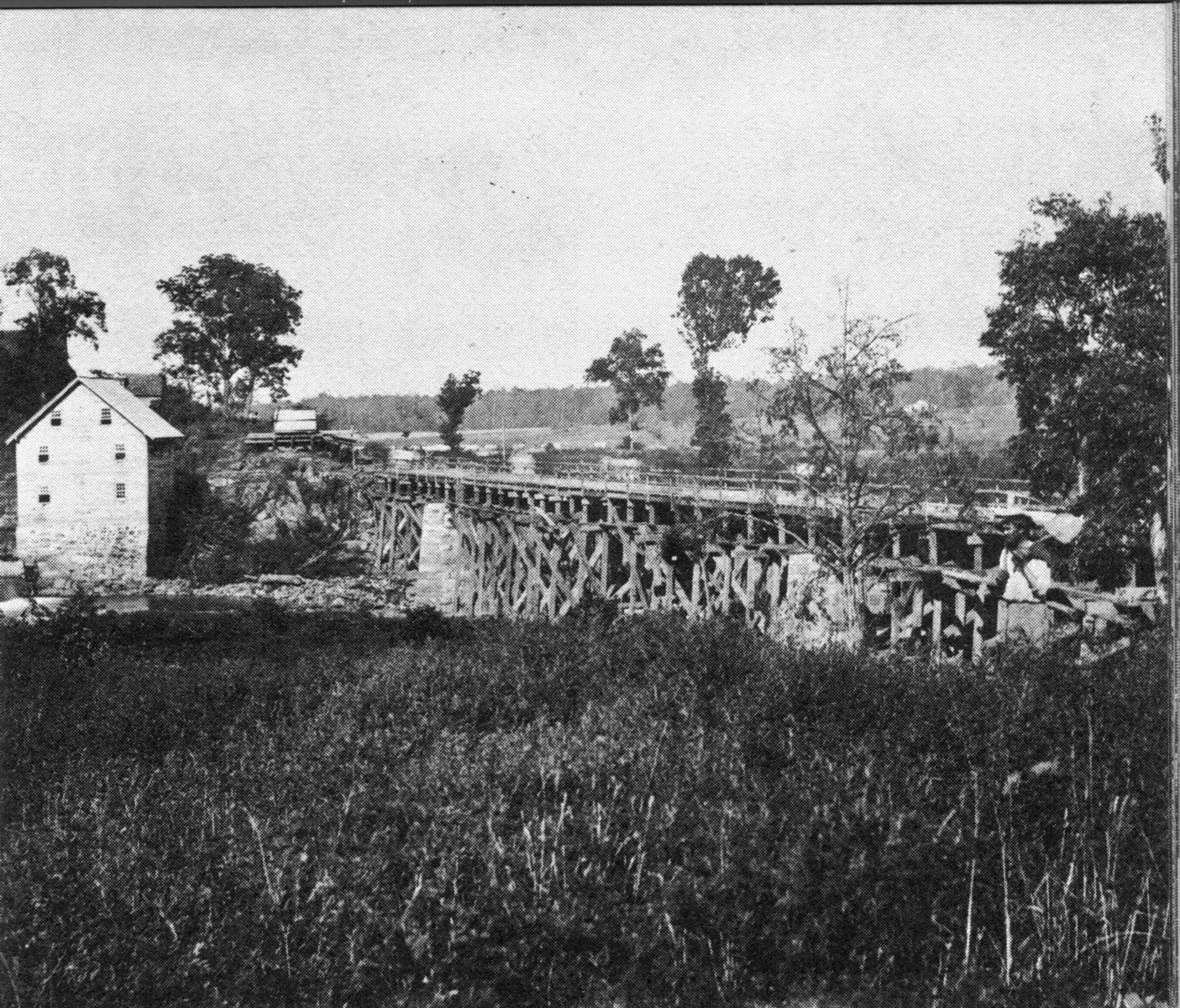 1862 photograph taken of the mill and the rebuilt railroad bridge at Rappahannock Station. - Library of Congress 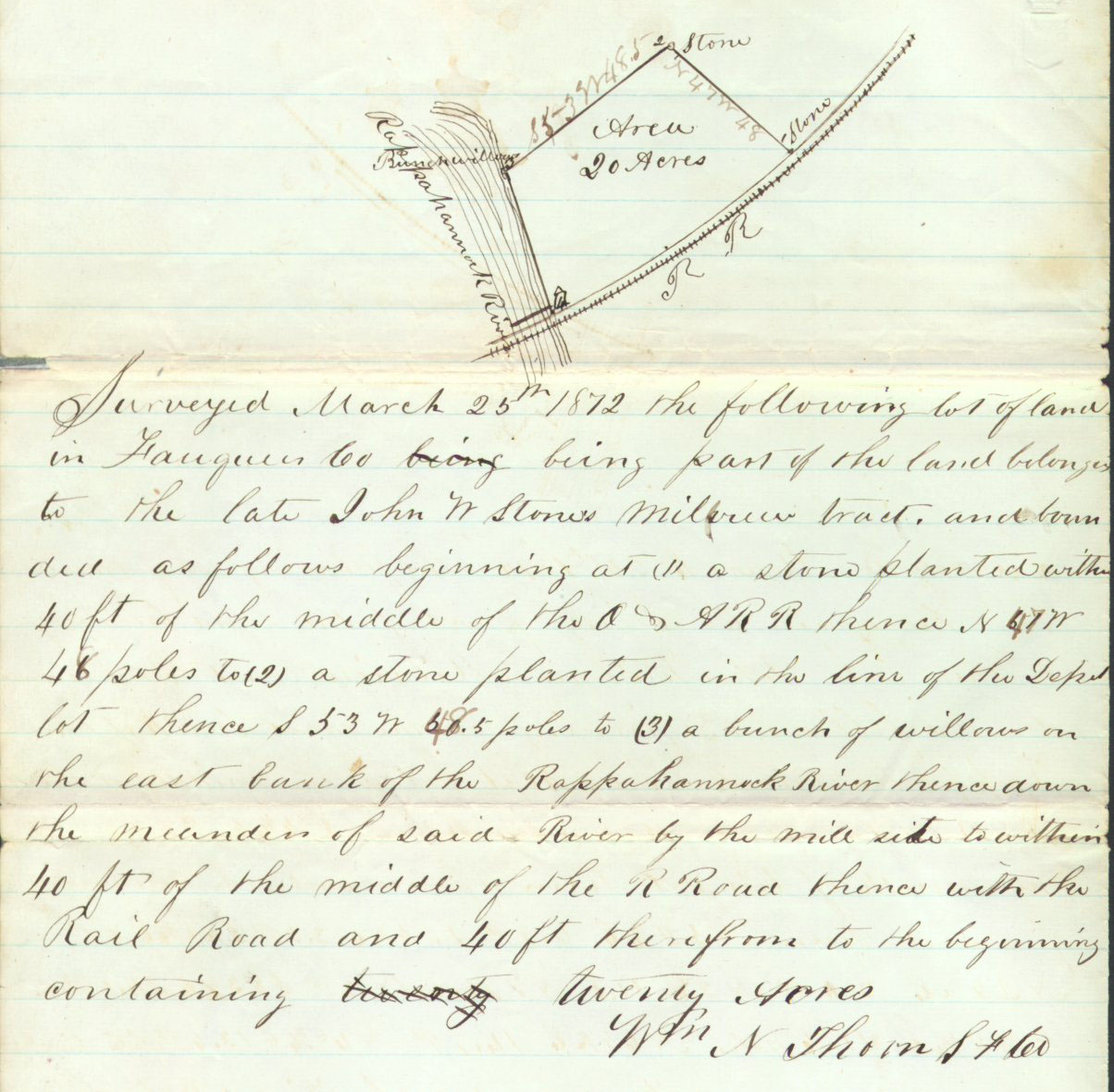 1879 Survey plat and description of the Martin/Morgan mill from Chancery Cause after John W. Stone's death. The surveyor was William Thorn, and his plat shows the mill and the dam at the railroad's Rappahannock River crossing.

View a comprehensive Timeline of the Mill. 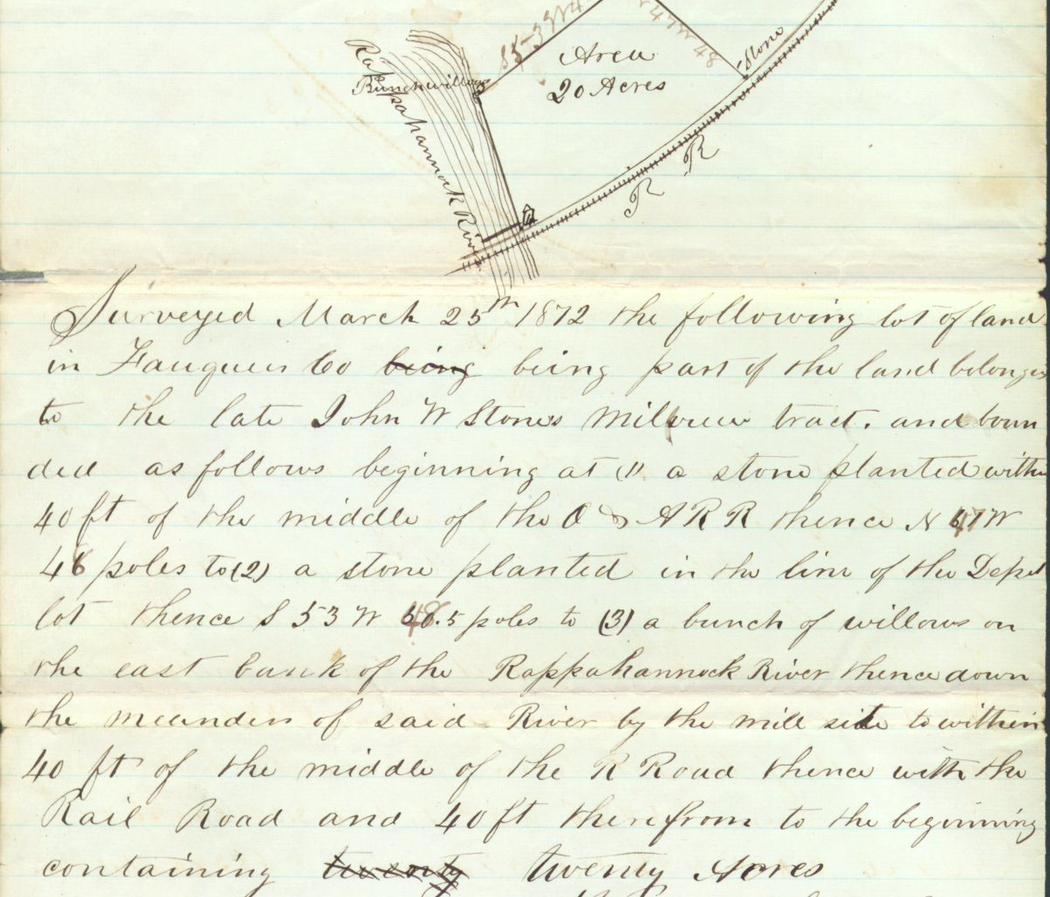